In this week’s issue, I’m highlighting the work of Jack Lovelock, a New Zealand born Olympian who was famous in his time for setting a world record in the mile at 4 minutes, 7.6 seconds and for winning the 1500 meter race at the 1936 Berlin Olympics.

In addition to his athletic accomplishments, he later went on to become a Rhodes Scholar and a physician who left us with prescient ideas on how doctors should relate to young athletes. These ideas are what I’ve decided to share with you this week.

I enjoy hearing from readers, so please reply to this email with your thoughts, or you can provide anonymous feedback using this form. 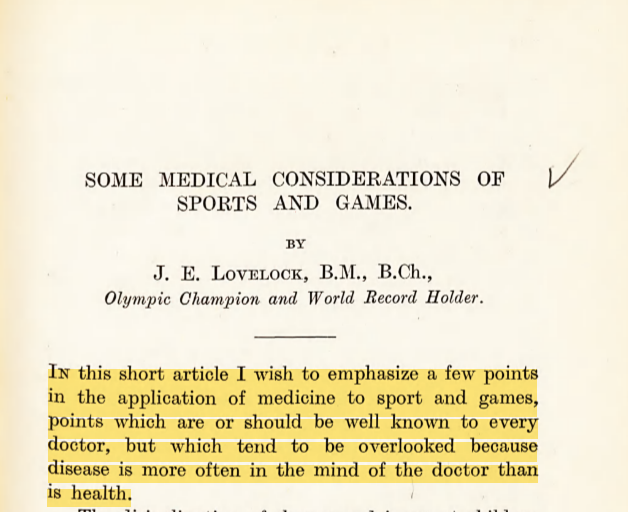 Jack Lovelock was a New Zealand born Rhodes Scholar, world record breaking mile runner, Olympic gold medalist, and physician. Here is an amazing video of his most famous race, the 1500 meter run at the 1936 Olympics in Berlin. 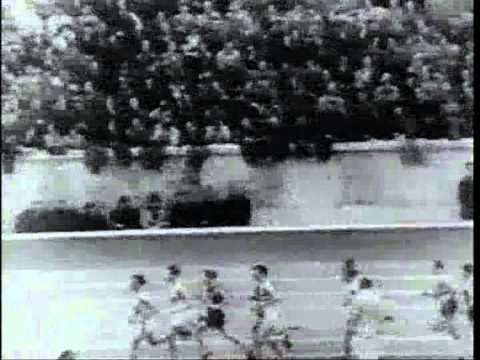 Jack Lovelock is known to New Zealanders as the athlete who won New Zealand’s first Olympic gold medal for athletics in 1936 in the 1500m.

Lovelock’s “Some Medical Considerations of Sports and Games” is a five page article written in 1939 about the way a medical man, to use Lovelock’s language, should help guide children to health through the practice of athletics.

While the article is about young people, I think it’s broadly applicable. Lovelock’s writing is remarkable for its clarity and sharpness, and his message is poignant even 83 years after its publication. I recommend reading the full article from which I’ve covered a selection of my favorite passages on the following topics:

How to Become a Confident Athlete

“The disinclination of clumsy and inexpert children to take part in organized physical exercises, games and athletic sports is one which every person interested in young people’s health and welfare is constantly meeting.”

“This self-consciousness can largely be dispelled by an enthusiastic sports master or games adviser, but it is mainly to the medical man that the more careful of these physical fitness experts will appeal for help and advice. It is the family doctor, the school medical officer, and the medical adviser to the club, who can so often persuade the child or young adult, poorly blessed by nature as far as his physique is concerned, that by steady effort he can make his perhaps malformed body into a comparatively normal and healthily active one.”

“It is important to lay stress from the beginning on the obvious and essential association between the mental and the physical sides of sport. All forms of athletic sports and games must appeal to the mind and to the imagination of the player, and above all in the case of the less expert child, for if he or she can be sufficiently interested to forget self-consciousness, in time self-confidence will lead to steady improvement in physique.”

I always find skilled writers from this era to have a special charm. The words are direct to the point of near offensiveness by today’s standards, yet the overall feeling I get is that Lovelock is both benevolent and intellectually invested in his topic.

In this passage, Lovelock exposes a common obstacle that prevents people from exercising. Surprisingly, he poses a solution that isn’t merely pragmatic, but one based on his understanding of psychology.

“The disinclination of clumsy and inexpert children to take part in organized physical exercises, games and athletic sports…”

People are afraid of looking silly, of not knowing what to do. To use Lovelock’s words, we have to know that, “by steady effort,” we can mold our “malformed” bodies into “comparatively normal and healthily active ones.” Perhaps not all of us are “malformed,” but nearly all of us have had the experience of being out of shape, overweight, or uncoordinated. This doesn’t stop only children from exercising, it stops adults too.

“Sports and games must appeal to the mind and to the imagination of the player.”

We have to acknowledge that our minds and bodies are one integrated whole. If we are bored and disinterested, we will instead focus on the negative aspects of our bodies. But, if the activity is stimulating, Lovelock suggests it’ll distract us sufficiently from our ineptitudes. We have to find activities that we like.

For years I hounded a close friend to exercise regularly. He dabbled with this and that, never establishing a routine. Eventually, he had the idea to try Muay Thai kick boxing. Now he’s in the gym four or five days a week. It may take a few tries, but finding something you love could be the key to establishing a regular practice of exercise.

“But in order to do that [inspire children] adequately, the medical man must have some good understanding of the essentials of physical movement, of its place in the raising of the general bodily health, and above all, must be prepared to treat the children, not as patients, with attention focused on disease or potential disease, but as living thinking human beings aiming at getting the best out of their bodies and their minds.”

This crosses my mind every time I sit down to write this newsletter. It can become a morbid business writing about disease on a regular basis. Lovelock reminded me of the reason I started my medical practice in the first place: to think about health in the positive; to live, not merely to avoid disease or prolong life.

“The doctor is frequently consulted about the details of general fitness such as the amount and type of exercise, diet, food and drink, alcohol and tobacco and their place in sport, massage and baths, and a host of similar points. He must have his own ideas clearly defined, and must be a good enough physiologist to explain to both participants and coaches the scientific reasons for his advice, for in these days the young are very critical and by no means ready to accept advice blindly.”

If he were alive today, Lovelock might be dismayed to find that these topics are still heavily debated, and that the average general practitioner is further than ever from having the time and training to effectively counsel patients on these issues. Fortunately, there is a robust industry of fitness experts, specialty medical practices, and online resources that can guide people in the right direction.

“The much over-worked subject of diet”

“He [the doctor] should be able to advise on the much over-worked subject of diet, of which many people make an unnecessary fetish: simple health rules on food should include the need for fruit and vegetables, milk and butter, the importance of small, more frequent meals well masticated taken at regular times of the day, and never just before or just after violent exercise.”

If Lovelock thought the subject of diet was “over-worked” in 1939, I imagine he’d be unsettled by today’s diet-wars and medical practices like mine in which there is detailed attention to nutrition. I think Lovelock’s advice on diet here is solid, and many would do well to follow it.

However, his advice is overly simplistic for the many people who struggle with metabolic health, food intolerances, or who have aspirations to compete in a world where the fastest mile is now 25 seconds faster than Lovelock’s world record time from 1933.

The Underestimated Importance of Sleep

“He [the doctor] should emphasize the essential importance of sleep in order that the body tissues, fatigued by exercise during the day’s activities, may have an opportunity to recover, and the growing body the best chance to fill out. This is a subject to which the average person does not give enough attention. Eight hours sleep a night is a good average, but young, growing people need much more. Regular hours of sleep are as necessary as regular exercise and regular meal times, while the importance of a quiet, well-ventilated room in the production of restful sleep is only partly realized by most young people.”

I think this quote stands alone. I’ll only add that many adults who exercise vigorously may need more sleep than they realize, and that good sleep is probably the most important and fundamental pillar of good health. An exhausted person is unlikely to eat well, exercise, manage stress, or be productive or creative. Sleep is the foundation for all other aspects of health.

“Prophylaxis is the only satisfactory remedy for ills”

“Prophylaxis is the only satisfactory remedy for ills, mental or physical, in the field of games and sports. Treatment of the fully developed disease is too often mere patching up of damage.”

“The general practitioner in contact with the very young has the big opportunity of keeping his charges from being ill. He must not become so obsessed with disease and potential disease that he forgets how to deal with healthy individuals as living and thinking human beings.”

Lovelock lived in a time before many diseases could be cured, and certainly before longevity medicine was a legitimate field of study. Medicine can cure far more diseases now than in 1939, but there are still many diseases that cannot be cured.

So, I think the old maxim about prevention still holds true, except now it holds up even later in life. I believe it remains worthwhile to be aggressive about preventive care well into the sixth and seventh decades of life for many people.

Lovelock was already famous for his athletic accomplishments when he died at the age of 39 in a somewhat mysterious accident. Had he lived longer, I believe he would also be well known for his work as a physician.

With the hope that I can learn more from Lovelock, I’ve ordered his journal. It’s said to contain meticulous training logs from his athletic career as well as notes on his greatest performances. I’m hoping that the journal covers his academic and medical career so that I can report on more of this amazing man’s ideas.

You just read issue #17 of Steven Kornweiss, MD. You can also browse the full archives of this newsletter.